World Mime Academy is not (yet) an institution of higher education. It is an international educational project aiming to provide high quality intensive workshops of mime, acting, dance, physical theatre and any type of corporeal expression in theatre, film and other media to professionals and those who want to become ones.

The idea behind the WMAcademy is to be a mobile, traveling educational event with the aim to bring quality mime education to different corners of the world and to have participants experience different cultures.

Program is based on four different 90-100 minutes workshops during the day in 5-7 days with additional consultations and/or mentorship that will result in at least 40 working hours in one week.

At least one lecturer/workshop will be provided by the WMO and at least one should be local and specific to the culture of the people of the host country, region or city. Acting or classical ballet is something we can find everywhere but folk dance is specific to peoples and regions, Commedia dell' Arte is specific to Italy, Tango to Argentina, Beijing Opera to China, Butho to Japan.

The program will finish with a public presentation of work done during the WMAcademy and possibly with performances of previous works of participants and special shows of lecturers, which altogether will come under a title of the World Mime Festival with a duration of one to several days.

All the workshops and other activities and events should be recorded for the WMO Video Archives and for possible use not only for research but as an online learning tool. 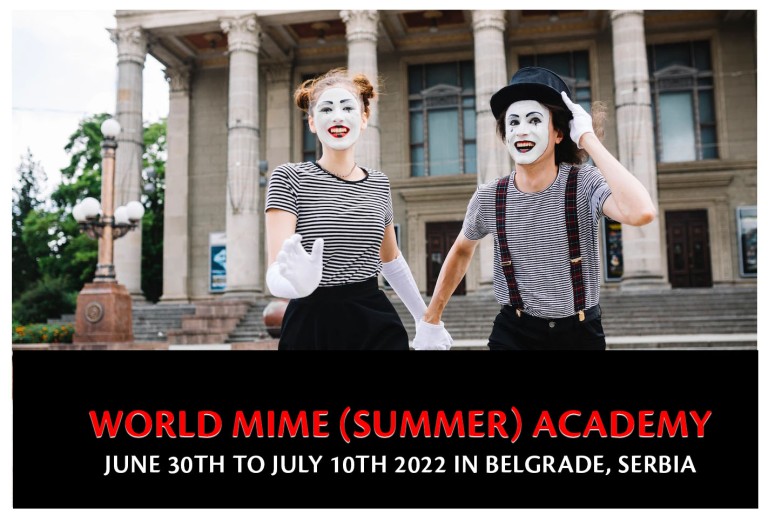 1) LECTURES (Hosted by the Student City Cultural Centre and Pinocchio Puppets Theatre; organized by the WMO):

2) WORKSHOPS (Hosted by the Student City Cultural Centre and Pinocchio Puppets Theatre; organized by the WMO):

Audience: World Mime Academy (WMA) participants (22 persons) and guests (5-10 persons. The workshops were closed for the public. Only members of delegations could attend)

Additional WORKSHOP of "Mime Praxis" by Vladimir Cvejić (Serbia / World Mime Organisation) for a group that did not participate in the World Street Mime Festival in Vrnjačka Banja.

Additional REHEARSAL with prof.dr.George Mascarenhas for the Final Presentation of Work:

3) Final PRESENTATION of Work as part of the World Mime Festival:

Audience: Members of the delegations and open to general public.

Audience: Members of the delegations and open to general public

Note: The Festival was opened by Tobias Biancone, Director-General of the International Theatre Institute.

Prof.dr. George Mascarenhas and Ofer Blum received the Special WMO Award for the Outstanding Contribution to the Art of Mime and prof. Ali Obaid, General Manager of the FFAA received the Certificate of Gratitude and Tobias Biancone Director-General of the International Theatre Institute received specially embroidered white mime gloves as the symbol of friendship and gratitude.

6) SPECIAL MEETINGS with (general) managers of theatrical, film, music and educational institutions, productions and festivals in Belgrade arranged by Marko Stojanović for heads of delegations depending on their interest and ideas for potential bilateral cooperation.

The program of the World Mime (Summer) Academy was very intensive even for the experienced professionals. During 6 days we had 3 to 4 workshops per day of hour and a half to two hours each and rehearsals for the final presentation, coming at the end to more than 40 hours of intensive work in one week.

On top of that in the evening of most days we had the World Mime (OpenAir) Festival, visits to museums and very little free time.

The tempo was exhausting for both participants and professors but the feedback that we had was very positive. Everyone was happy and enthusiastic and felt they have learned something new, redefined some knowledge and thoughts they had and accomplished something professionally.

This program was designed for adult professionals and those who want to become professionals. The work demanded full concentration, commitment and discipline and was very tiring both physically and mentally. 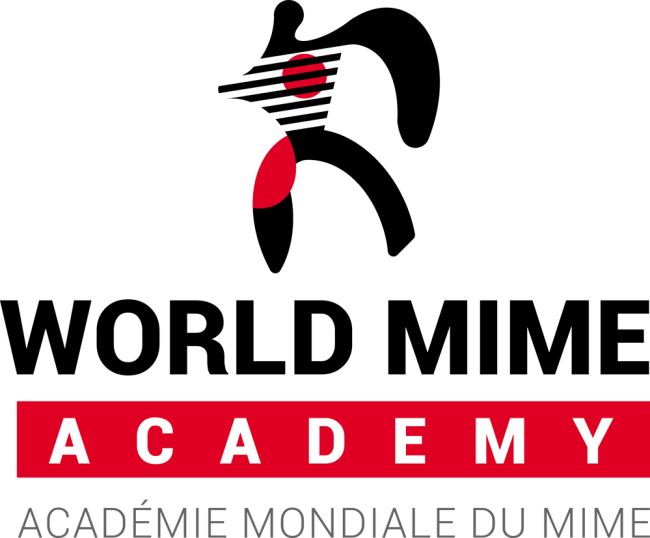 World Mime OpenaAir Festival is a spin-off project of the World Mime Academy that will enable the participants as well as professors to perform their longer and shorter mime pieces in Belgrade, the capital of Serbia and Vrnjačka Banja the most visited tourist destination in Serbia famous for its hot springs and mineral water.

The program of the festival is the following (Free Entrance):

PROGRAM (every evening at 9pm on the Summer Stage of the Student City Cultural Centre): 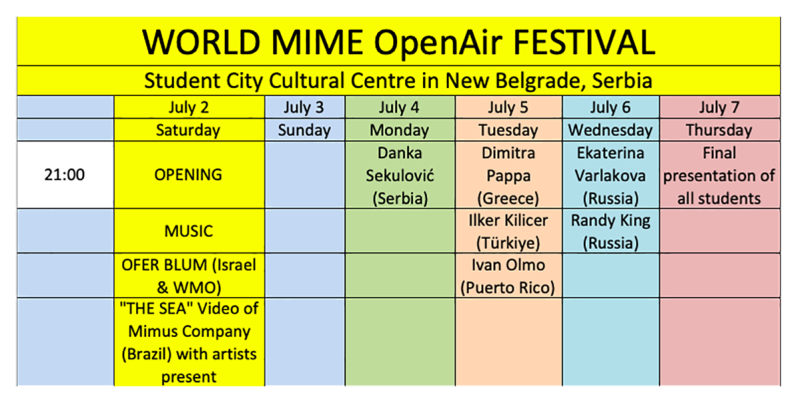 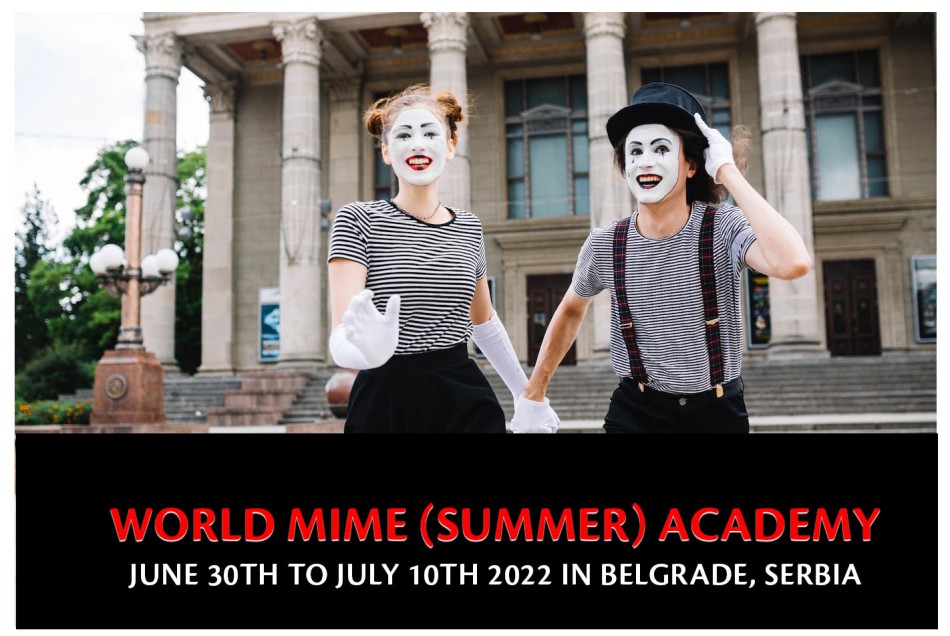 The program is intensive and it consists of 4 different workshops with 90-100 minutes classes every day for 5 days (6-7 hours per day) + rehearsals/mentorship for the public presentation + the public presentation = more than 40 hours in one week. Please write for reservations and more info to This email address is being protected from spambots. You need JavaScript enabled to view it.

THE PRICE FOR THE FULL PROGRAM:

We expect to receive a 100 Euros via PayPal to This email address is being protected from spambots. You need JavaScript enabled to view it. to reserve a place (If anything happens by June 1st (closing of borders, pandemic… you will be refunded the 100 Euros - PayPal % and after June 1st it's non-refundable).

We can provide you with the hostel room at the "Student City" Hostel with following prices:

Rooms are with two/three beds but can be rented as a single room as well.
Prices are per person per night with breakfast included.

You are expected to arrive on June 30th and you could leave on the 9th or the 10th of July.

All participants will have free entrance to the International Monodrama and Mime Festival in Belgrade (June 30th to July 3rd).